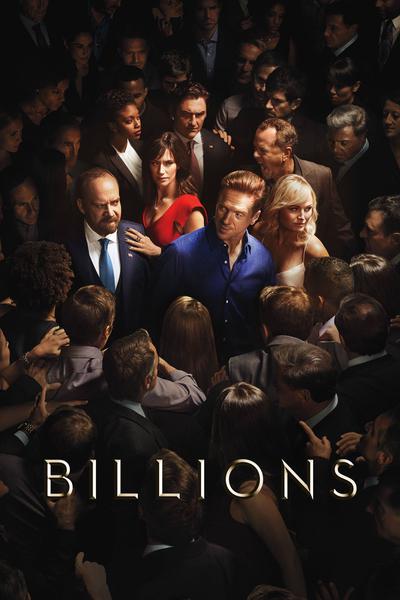 Powered by
0x
neutral
Billions has a neutral trend. It has grown in demand by 0x in Worldwide in the Last 7 days.
Powered by
Title position in
0.00%
Percentile
Rank
Billions ranks at the 0.00th percentile in the genre. This means Billions has higher demand than all other titles in Worldwide
Powered by

Wealth, influence and corruption collide in this drama set in New York. Shrewd U.S. Attorney Chuck Rhoades is embroiled in a high-stakes game of predator vs. prey with the ambitious hedge-fund king, Bobby Axelrod.To date, Rhoades has never lost an insider trading case -- he's 81-0 -- but when criminal evidence turns up against Axelrod, he proceeds cautiously in building the case against Axelrod, who employs Rhoades' wife, psychiatrist Wendy, as a performance coach for his company. Wendy, who has been in her position longer than Chuck has been in his, refuses to give up her career for her husband's legal crusade against Axelrod. Both men use their intelligence, power and influence to outmaneuver the other in this battle over billions. The high-profile cast is led by Emmy winners Paul Giamatti ("John Adams") and Damian Lewis ("Homeland") as Chuck Rhoades and Bobby Axelrod, respectively.